In a recent post entitled: Victory Church Sriracha Breaks 100 Barrier! I shared how we recently celebrated the major milestone of reaching over 100 attendees at our Sunday morning service.

The reason this is so great is not just because the seats are full or it makes the attendance record look good, but because this number represents 100 people coming to know their God, getting saved, being raised as leaders and fulfilling their God-given destinies.

It’s so amazing isn’t it?

Today I want to share with you one story in particular from one of our young people, Andrew, aka Thanaporn. I know it’s going to give you more of a passion to reach the unreached.

I came and joined Victory Church in Sriracha as a missionary back in 2015. One of the first things we did was launch a young people’s program called Gow Gilo.

Working with Hannah Thompson, a missionary from Pakistan, we would stand outside school gates handing out flyers, open up the church every day and give free English lessons. It was a great way of building real connections with some of the local Thai youth.

Andrew was one of those who came along to the free English lessons after school. 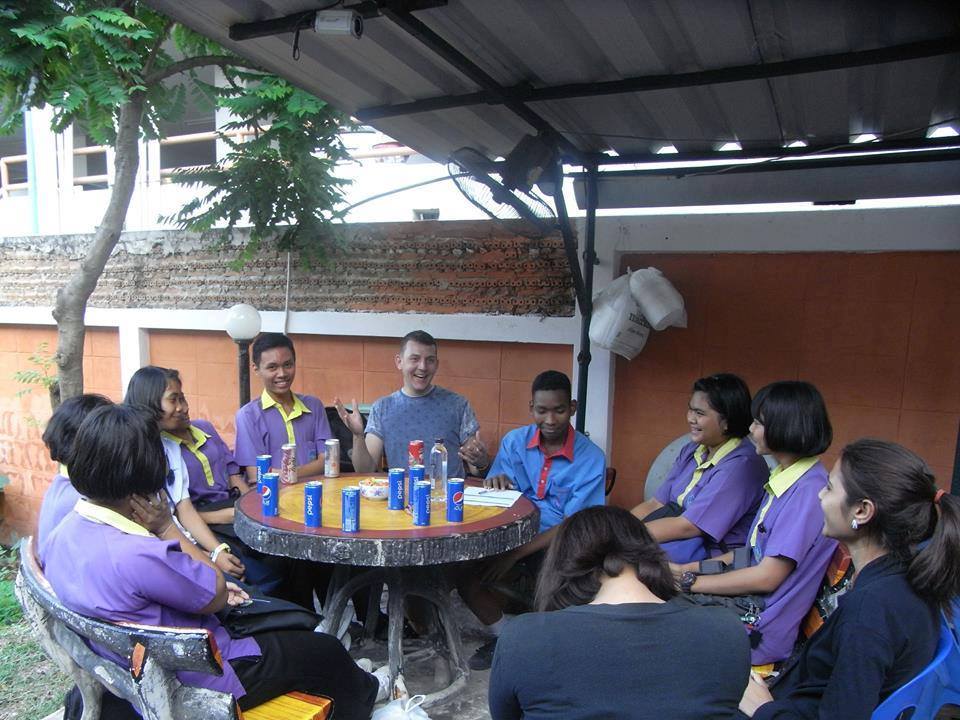 One day Hannah and I met Andrew in a coffee shop and started sharing the gospel with him. At that time he seemed unsure and said he needed time to think. It wasn’t long after that he kinda flew out of the radar for a couple of years…

I never stopped praying for him and tried finding him on Facebook a few times, but nothing.

Then in early 2018 Andrew contacted me completely out of the blue saying “God’s been speaking to me and I’m ready to come to church!”

Sure enough, the next Sunday he did just that and within a couple of weeks we met again in a coffee shop and he made the decision to give his life to Christ!

Living with a dark secret

About 3 or 4 days later our whole church went to a conference where the Holy Spirit began to gently speak with Andrew.

You see, Andrew never knew his dad and his mum never bought him up in conversation.

“Why is your skin so dark?”

“Are you only a half Thai?”

Because Andrew simply didn’t know the truth, from a young age he learned it was a whole lot easier to just make up a story. He would tell people he was half Brazilian or that his dad was an African American.

It was only as he got older that Andrew learned the ugly truth – Andrew was a result of an anonymous rape attack on his mum and she had no idea who his father was.

This attack pretty much destroyed his mum’s life. her than husband believed she was cheating on him and left her and she lost her whole career.

So you can see why the Holy Spirit was dealing with this with Andrew; he began to feel bad for lying to everyone about his dad. More than that though, this young lad had been walking through life carrying a whole weight load of shame and guilt and Daddy God wanted him to know he didn’t need to carry this anymore.

No longer  are the horrific circumstances surrounding his conception going to define him – sure that might be how the story started but it’s not how it’s going to end!

At the time Andrew shared all of this with me and the Holy Spirit was ministering I remember we were cut short. We were sat in the corner of a conference hall and I needed to take some of our church members home.

But I remember clearly we needed to talk about this further and God wanted me to minister to Andrew with the prayer of Jabez, a very famous story from 1 Chronicles 4:9-10, especially beause his mum bore him in great pain.

“Now Jabez was more honorable than his brothers, and his mother called his name Jabez, saying, “Because I bore him in pain.”
And Jabez called on the God of Israel saying,
“Oh, that You would bless me indeed, and enlarge my territory,
that Your hand would be with me, and that You would keep me from evil, that I may not cause pain!”
So God granted him what he requested.”

Skip ahead a week or two and one night after Youth Connect group I was driving Andrew to his home in neighbouring Chonburi when I saw a sign above a shop that read “Thanaporn” in Thai.

I’m forever practicing my Thai reading so I just said it out loud, almost without thinking, when Andrew said,

“You know that’s my name right?”

I hadn’t thought about it but, yes it was his real birth name.

“And do you know what it means?”

I hadn’t the foggiest.

“It means one who gets what he prays for.”

When Andrew said this I just couldn’t believe what I was hearing. I just looked at him with an unbelieving stare. I asked him to tell me what his name meant again and then again.

I knew right there and that God wanted me to share the prayer of Jabez with him. God couldn’t have been clearer.

We parked up outside his house and I opened the Bible. he couldn’t believe it either – this was a direct word from God to Andrew. 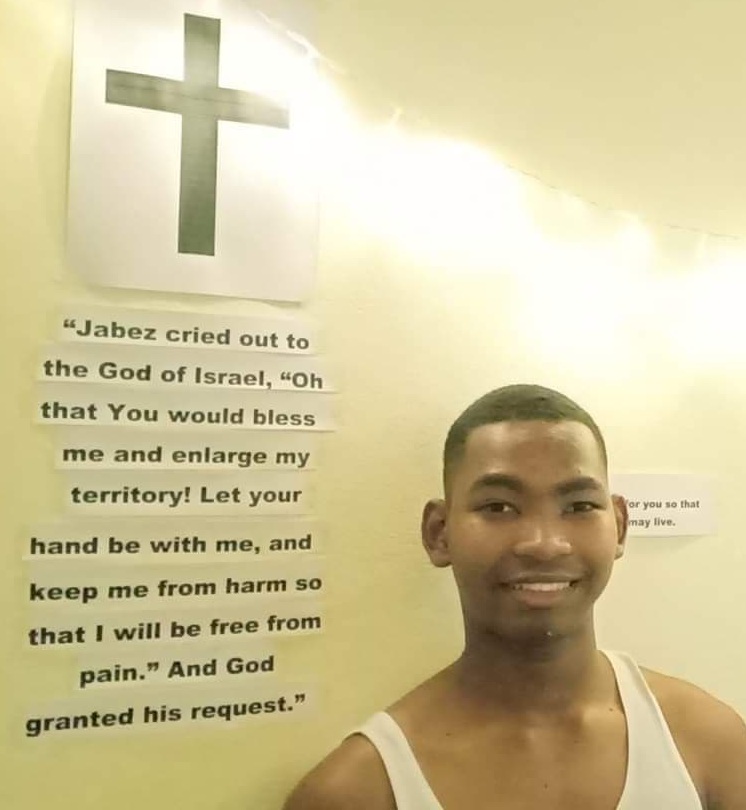 Not only did his mum bear him in great pain, but his name means one who prays and God answers!

When Andrew went home he printed out the prayer of Jabez and stuck it on his bedroom wall.

He is no longer defined by a tragic past, but rather, looking forward to a bright future in God.

A new identity, a new destiny

God’s hand is indeed with Andrew and He is enlarging Andrew’s territory and guess what?

God has only just begun!

In the weeks since that video interview was filmed, Andrew’s mum has also come to know the Lord in a  wonderful way. 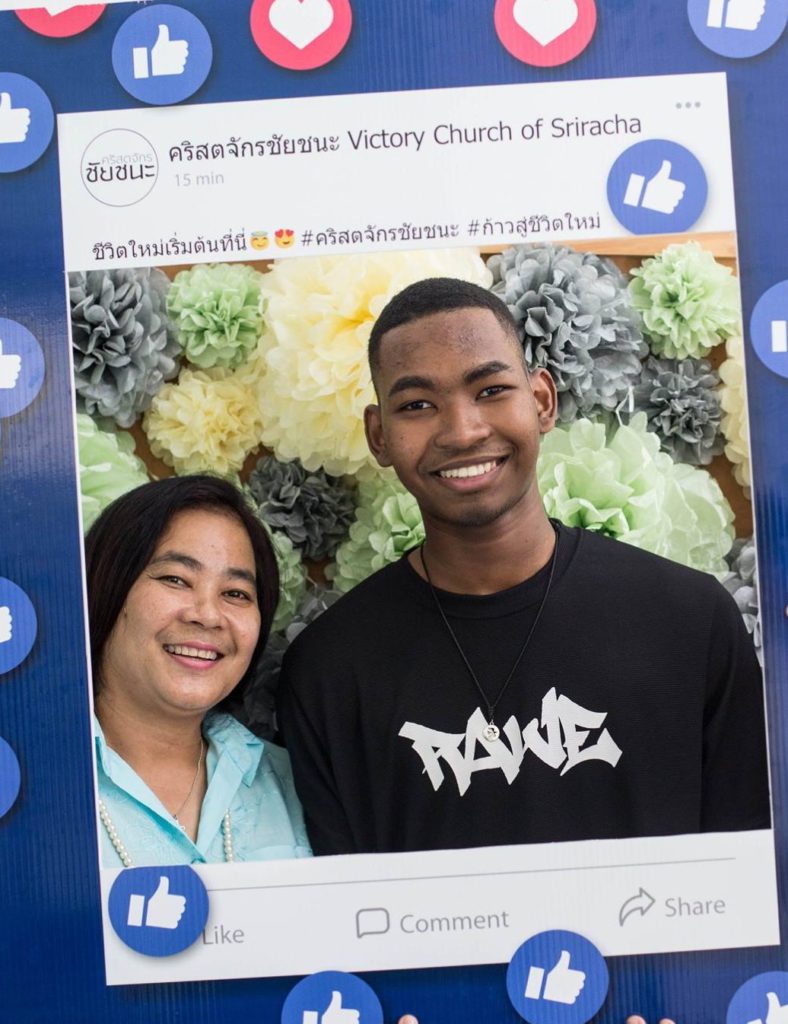 You can find her in church on a Sunday morning dancing and praising God on the front row!

God is so good!

Andrew will be baptised later this month and plans to attend Victory Asia Bible College in September 2019.

I hope you’re encouraged by this amazing testimony, just one of the many extraordinary life changing stories we’re hearing on an almost daily basis. I stand in amazement at what God is doing in the lives of his people!

Please, if you have any words of encouragement for Andrew, feel free to share them in the comments below and I’ll make sure he sees each and every one.